When someone asks me about my take on friendship my mind goes through an instant recap. Someone says friendship and I phase out. You know a bit like in movies where flashbacks come and go in black and white hues. I see the first day of school, the day when I had first met my best friend R. Then fast forwarded to a couple of years later I see myself with her again. A few other faces flash by but it is only R who seems to be a constant in my life when it comes to friendship. Her face is one that makes me happy. But there is another face there too, that of a very dear friend, or at least who was very dear once in my life. Let’s call her T. With her face come the good and bad memories as if opening the flood gates, instantly filling my heart with hurt more than anything else. 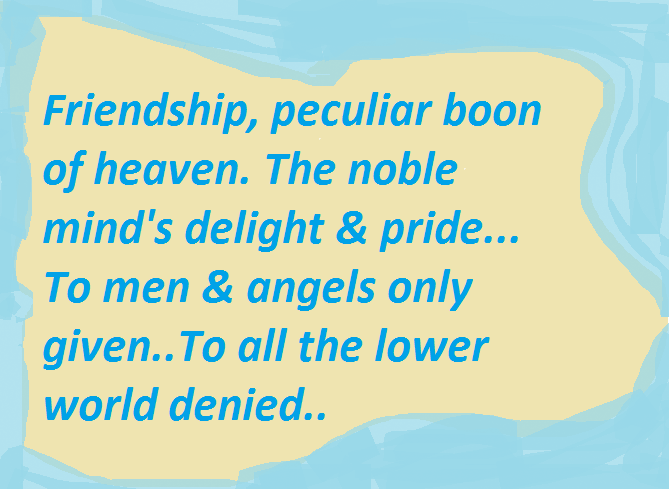 I think some people are destined to have many friends, many good friends. My sister does. But I surely am not one of those. I don’t bite, you know? But somehow I don’t have many good friends. There are only a few people apart from my family whom I can count as my confidants. R is certainly on top of that list. And then come M and B whom I had first met in junior college. Of-course, I’m only in touch with the latter two through social media but I’m sure if we met it would be the same again.

You know a lot of friends that people make in their lifetime are from their graduation days. I must admit I have no such friend to show from that chapter of my life. Only acquaintances. I mean I did have a bunch of buddies at that point in time but then something happened. They all left me one by one. Why and how. Well these are questions that I often introspect on. All I can say is between T and I, they took T’s side, leaving my companionship. I wouldn't say I didn't do anything wrong. I must have done something. But their deserting me altogether was wrong too. You don’t pick between friends that much I know. If they couldn't accept me the way I was then I guess it was a good thing that they left me. Well, I did try to take a few steps towards them once college was over but there is only so much one can do no? With T I had one of the most turbulent relationships in my life. Can you imagine friendship being violent? Well, being with T taught me that it could very well be so. I don’t think I have cried and been disturbed as much in my life as I have been in those 4 years of graduation when I was closest to her. She is not a bad person at all. In fact she was and still is, I’m sure, a great person. But I guess our friendship was not meant to be. So all I have to show for friendship from my graduation years is a clean slate. And honestly I have stopped caring now.

When I began working I formed rapports with M, P and S, three friends who are now in different parts of the world. But even today we manage to rake up a storm even if only on a Whats App Group. It’s not bad, is it? At least not after considering how difficult it is to form strong bonds in the grown up world.

So there I can just count my good friends on my hand. They are only so many in number. But it’s not so bad. I still have many acquaintances. And then there are S’s and my sister’s friends with whom I always have a great time. 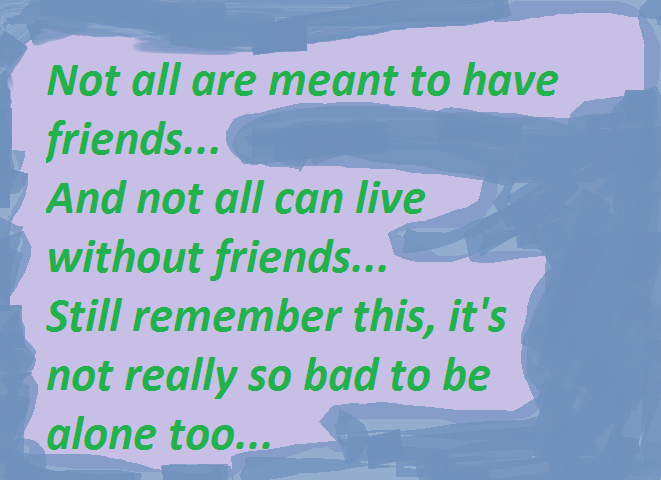 Nonetheless I wish I was still friends with T but I also know that I can’t take any more hurt, not in the name of friendship at-least. I’m happy with the small circle that I have. And because I don’t have many friends I think I find it easier to adjust to a new place where I have to be alone. And quite frankly I would chose being alone any day over a friend who brings sadness and mental stress along.

I would have loved to have a group as in F.R.I.E.N.D.S but we can’t have it all, can we? So I’m happy with those few jewels that I can show off. I don’t need the entire sky just a few stars are enough for me. I have stopped needing friends because then there is the possibility of me getting hurt again which I certainly do not want anymore. Moreover, I have R with whom I’ve been friends for most of my life. Many don’t even have that right?

So as bad as it sounds friendship for me is not really a necessity in life. I can live without friends; four years of college has at least taught me that, if not anything else. But that is just my personal opinion. You tell me what is your take on friendship?