My fellow blogger Ananya had raised a question on her blog a few days back. It was actually a question by one of her readers and it really got me thinking. She asked ‘Is motherhood a choice?’ and I’ll try to answer it based on my understanding of life so far.

For some reason, motherhood or let’s say parenthood is a subject which becomes not just a couple’s but everyone else’s concern. Privacy is a concept that is alien in our society. And it’s not only the women but men too who, without any shame, pose these questions to women. What I don’t understand is why is it anybody’s concern whether or not, or even when, a couple decides to have a baby? I think it’s an extremely private matter and nobody has the right to interfere or influence this decision apart from the two individuals in a relationship. Having established that let’s dwell on the bigger question. Is motherhood a choice?

In India as soon as a woman gets married she is literally hounded by relatives and neighbors to produce an offspring. It could be the very next day of the wedding and you would have shameless relations interrogating the woman if she has any good news. Frankly, I ignore such people. It’s simple. Those who don’t know where to draw the line need not be heeded to.

Becoming a mother is a big step in a woman’s life. Of-course, it’s a big step in a man’s life too. But the amount of bodily changes and emotional upheaval a woman goes through is really far more than what a man experiences. And then in India for a working woman it becomes really hard to juggle both responsibilities especially with the terrible policies at the work place. More often than not she has to give up her job, even if for some time, and all her aspirations begin taking a back seat. And not only that, women are expected to be happy with that kind of sacrifice and not complain too. After all, according to our society motherhood is all a woman’s life is about no? Motherhood is great but not when thrust upon forcefully. 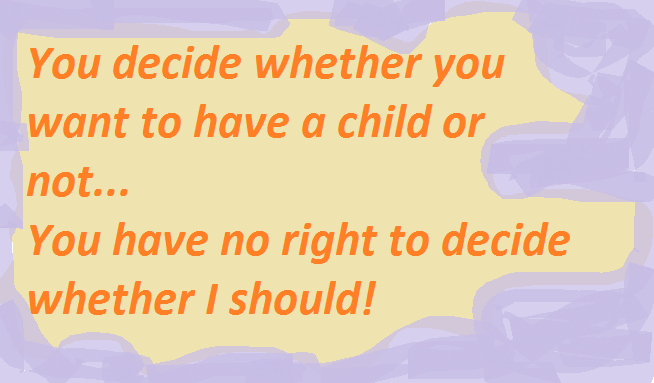 It’s not easy for women. Earlier women in India were made to believe that bearing a child was the essence of their existence. And perhaps that’s why women never pondered on whether they really wanted to step in to motherhood or not. Or, even if they did, the voices were few and far in between. But times change and with that the thought process of individuals too. Today, mostly in the urban areas, women have begun to question whether they want to marry or whether they want to have a child. And rightly it is their choice. Every woman has the right to decide for herself what she wants. After all every individual, whether man or woman, has the right to live life on his or her own terms. And it holds true for motherhood too. And it certainly doesn't make the woman a pariah or cold no matter what the society suggests. It doesn't. You know we as women should begin ignoring this over-bearing social order of ours. Because the society is not going to spend sleepless nights with the baby or the society is not going to fund the baby’s life. The society is not going to reduce the mental stress of unwanted motherhood. The society is not going to ensure that the aspirations of a woman don't get buried under the duties of motherhood, when the latter is not desired. So what I want to say is such decisions shouldn't be made to please anyone but oneself. Lastly but importantly when a woman is in a relationship it is always better that she lets her partner know of her thoughts about motherhood, provided she knows that she doesn't want a child at the time of getting into a relationship. But if she doesn't and the realization strikes later then she definitely shouldn't smother herself with guilt, after all at the end of the day she is the one becoming the mother. And hence motherhood is HER choice. I would also add that a true partner would certainly understand this kind of decision.

So there no woman should beat herself up for not feeling excited at the prospect of becoming a mother or not having ‘bearing a child’ as a priority item on her life’s To-Do list. As they say it should be to each their own.

PS: I’m not against motherhood but I’m certainly against those people who push a woman to the brink of breakdown if she says she’s not ready for a child or if she says that she doesn't want a child. Leave her alone, leave women alone please!

I'm part of Write Tribe Pro Blogger Initiative. You can read some great posts of the initiative here.